In modern pigeon racing the absolute number 1 family for speed racing is that of the Belgian champion Dehon-Demonseau. Year after years winners of the 1st Nat. acebird KBDB speed and the leading strain now at the loft of PIPA Breeding. Worldwide offspring of this family wins in National racing and International One Loft racing.

A small survey of KBDB successes for Dehon-Demonseau in KBDB competition:

Since the end of the last century more and more the Belgian area of Mons-Borinage – next to the French borders – developed as a very strong centre of speed racing. Clubmate Marc Capelle even managed to win the 1st Nat. acebird KBDB speed and Hugo Gorniak was one of the very best in the country. Daniel Demonseau and his partner Mee-Hae Dehon were very much inspired.  They were on top of the world when in 1998 they were crowned 1. National Champion Sprint KBDB… the start of a very successful era.

The area of Mons-Borinage became a Mecca for sprint racing, with hundreds of fanciers competing each weekend against thousands of pigeons. All the strong fanciers participated in the biggest pigeon club of the Hainaut province. In these years the partnership Dehon-Demonseau developed as one of the top fanciers in this province. 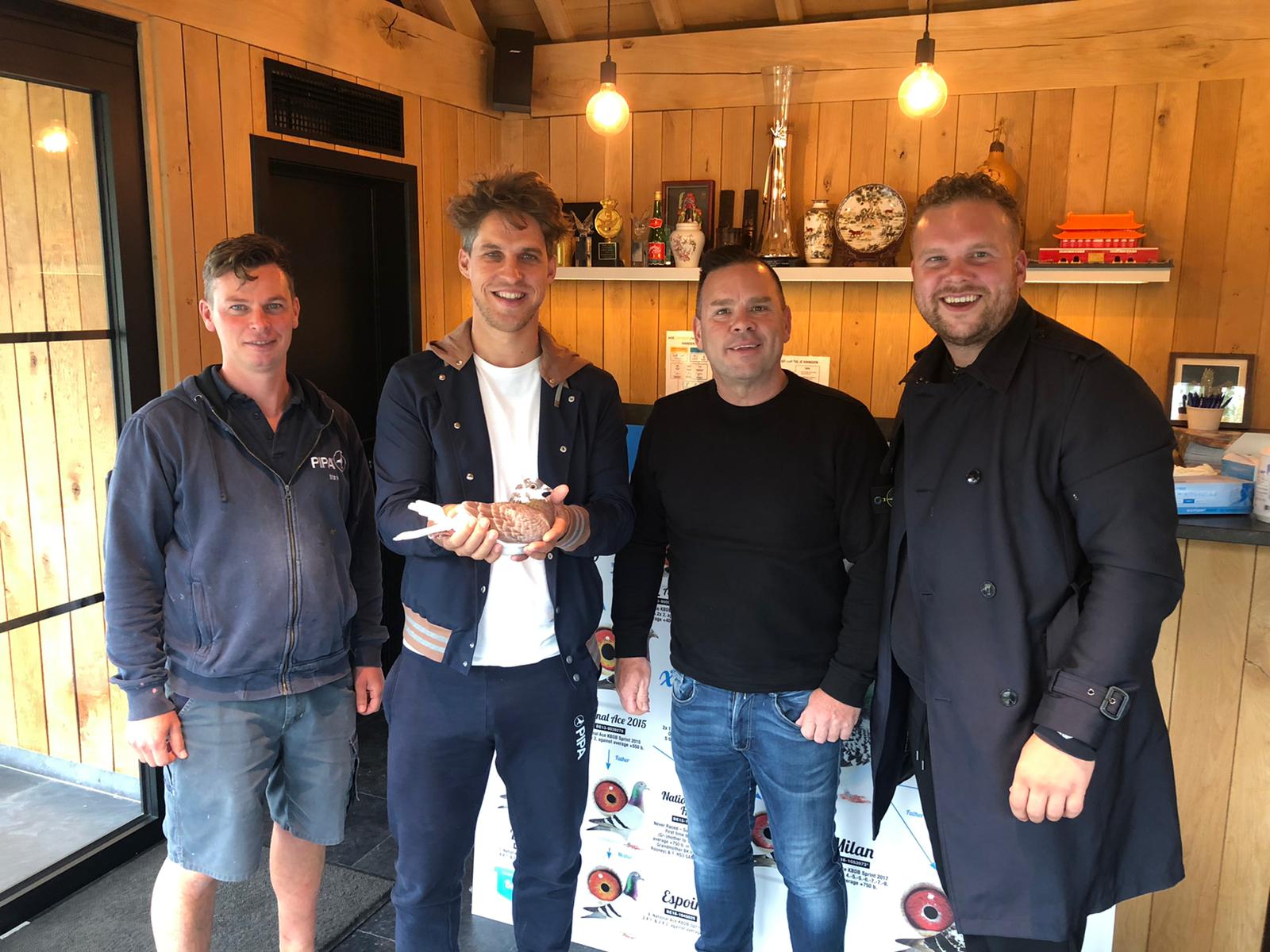 Since the middle Eighties Daniel works at Audi Brussels and since 1991 he started racing pigeons by himself. As he had different shifts at his work, it was very important his wife Mee-Hae got involved looking after the daily care of the pigeons together with her husband. More and more she grew in her role and after first doing things like cleaning the loft, now she also is a full member when in comes to training and feeding of the breeding and racing pigeons. Since the beginning Dehon-Demonseau specialised 100% on the sprint races with ocasionaly a few pigeons on the middle distance competition.

The colony of Dehon-Demonseau is absolutely small, but full of quality! About thirty widowers are raced and six breeding pairs breed the new generations toppers. The best pigeons have always moved to the breeding loft once their career is done and therefore the results were getting better and better. The main basis is built around a few pigeons purchased at the late Maurice Casaert in 1997. Their descendants are still doing a great work in the lofts at Thulin. More recently, a hen coming from Deno-Herbots (granddaughter of the ‘Blauwe Bliksem’) was purchased and she has already given some satisfaction.

It was the crown of a very good career until than … but what many did not know than is that it was the start of one of the best era’s in Belgian pigeon racing! A year after the 1st. Nat. ace title of ‘The National ace’ another Dehon-Demonseau pigeon also did very good ending 4th Nat. acebird KBDB Sprint 2016; this was BE15-1029362 … Daniël decided not to put him in the breeding loft but brought him to the start of the 2017 season as favourite in the racing team … this was the best decision he ever made in his pigeon career!

At the end of the 2017 season, this super cock BE15-1029362 had been crowned 1st Nat. Ace Sprint KBDB with the smallest coefficient of the history. With an incredible coefficient of 0.89% won on 6 races he holds an absolute record in this discipline. As the best sprinter ever, he was given the name ‘Best Kittel’. His best top positions were:

The super success of ‘Best Kittel’ attracted many potential buyers to purchase him of Daniel and Mee-Hae … eventually he moved to Thomas Gyselbrecht the become star of the project PIPA Breeding. Part of the deal was that Dehon-Demonseau got children of the aces that went to PIPA Breeding to race them. As racing and winning is their main goal in pigeon sport.

The only child Dehon-Demonseau ever bred for racing was BE17-1019414 ‘Junior’ and it did not take this talent long to show its great class. As yearling he had a top season in 2018 and was crowned as 2. Nat. ace Sprint YL KBDB, just missing then Olympiad as 4th Belgian Olympiad bird cat. A Poznan 2019. He was the most important co-winner of the most prestigious title for sprint racers:

In 2019 this prestigious title was won by BE18-1045020 ‘Daniël’. His list of top performances is extremely impressive, winning a/o

‘Daniël’ is a real Dehon-Demonseau product with all the toppers in his pedigree … Father is himself winner of 16th Nat. acebird sprint KBDB and cousin of ‘Best Kittel’, also nephew of the 1st Nat. ace sprint KBDB 2015 ‘National Ace 2015’. As part of the deal with PIPA Breeding, all National KBDB aces move to PIPA – ‘Daniël’ too. In a short time he already bred toppers, grandchildren already won 1st acebird Al Shaheed One Loft Race 2022 and 2nd-12th-73rd-112th-123rd final Pattaya (PIPR) OLR 530 km 4,033 b. 2022. Brothers and (half)brothers are 1st prize winners and 1st prize breeders.

A year later another new phenomenon showed his great capacities: BE19-4130060 ‘Best Kittel II’ grabbed the title 1st Nat. acebird sprint KBDB 2020. Like his name already shows, he is a direct son of ‘Best Kittel’ bred at PIPA Breeding and paired to a full sister of Dirk Van Den Bulck phenomenon ‘Olympic Rosita’. In his short career ‘Best Kittel II’ was winner of a/o

Already in his first year of breeding he bred 5 different 1st prize winners. For sure his status as topbreeder at PIPA Breeding shall keep on developing to legendary status … he is for sure in good company; 10 different brother and sisters raced or bred at least 20x 1st prize winners in 9 different lofts in 5 different countries. 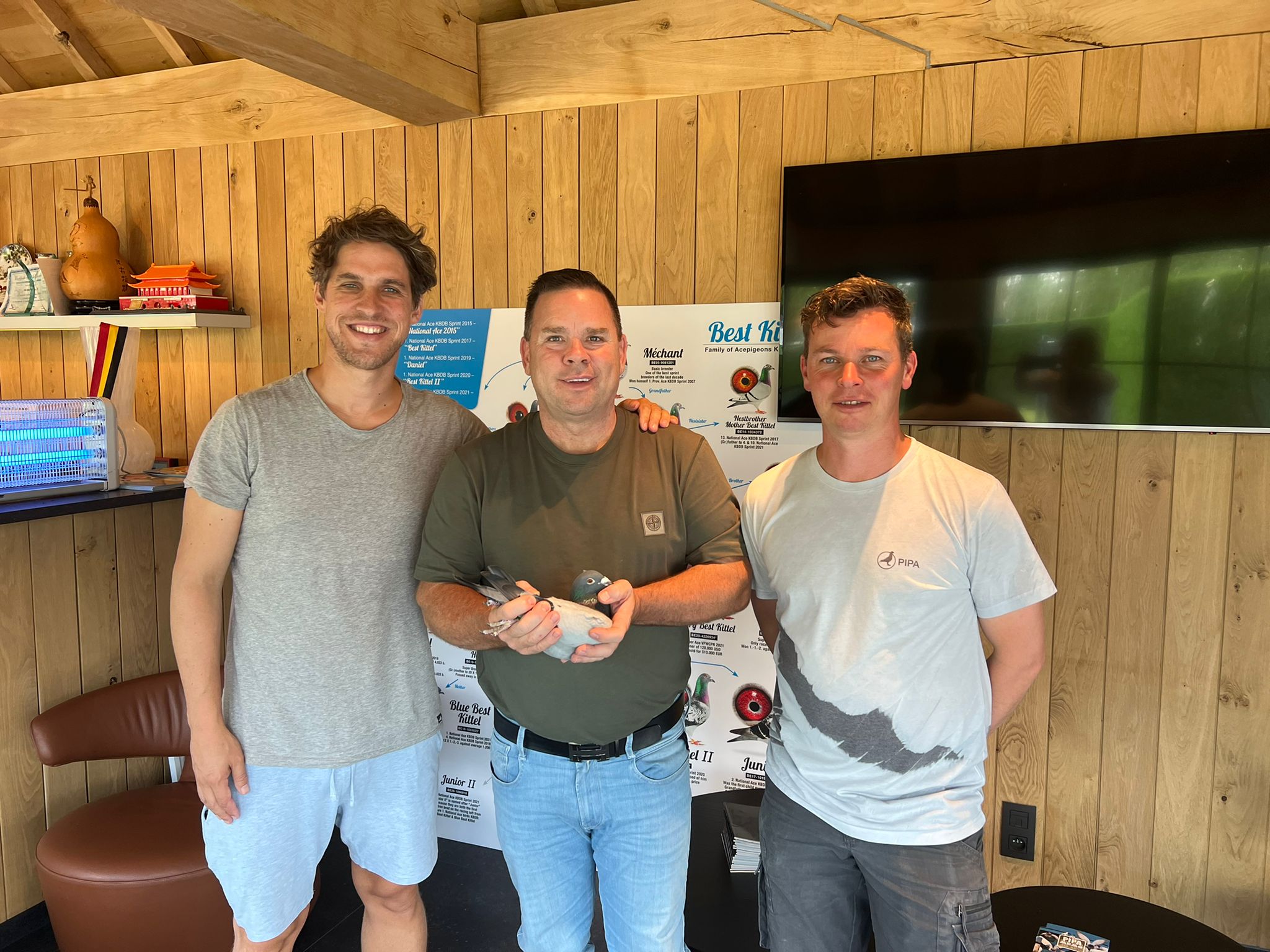 Already during his racing career he bred winning children! Only few children ‘Blue Best Kittel’ were sold in this period (4 or 5 maximum) and two of them already proved their worth as breeders. It is especially the case in UK at Pieter Oberholster where a son of the ‘Blue Best Kittel’ became father this year of a pigeon who won 1st prize final race of the Midlands National Flying Club on Weymouth against 2,137 youngsters. Still in UK, Derek Rooney won the 3. National Acebird Young birds RPRA 2021 with a granddaughter.

All the 1st National KBDB aces … all the references all over the world … in a record time the most important family in the world of sprint racing. That is the ‘Best Kittel’ family of Dehon-Demonseau and PIPA Breeding.