The last decennia the pigeon family of Belgian fanciers Dirk Van Den Bulck is most dominant when it comes to races from 100-500 km around the world. The number of winning descendants of his 1st Nat. acebird KBDB ‘Kittel’ and his top brothers & sisters like ‘Greipel’, ‘New Kittel’, ‘Bratt’, ‘Angelina’ and last but not least ‘Gold Dust’ is enormous!

When the name Dirk Van Den Bulck comes in mind, directly his base pigeons like ‘Goede Rode’, ‘Brother Goede Rode’ x ‘40000’ and ‘Golden Lady’ come in mind … offspring of these pigeons made Dirk world famous …

Since a little kid Dirk has always spend a lot of time in the pigeon loft … as a young lad he assisted his father in taking care of the pigeons. His father really loved the pigeons but he was not very competitive, mostly enjoying their trainings and arrivals was his biggest hobby … however when young Dirk more and more took over parts of the care, very quickly he won a championship title in the pigeon club Pulle fairly. He won this title with the pigeons of his father and until now still these old bloodlines are part of the Van Den Bulck family.

However ambitious as Dirk was and still is, he wanted to reinforce the old strain and invested at the best fanciers in his surroundings for quality injections. The most important influences in his top family in the making as: 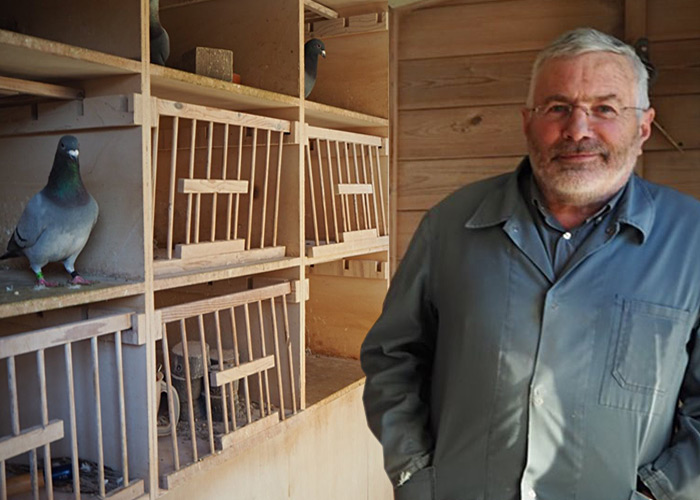 Dirk has always been a pigeon fancier who is eager for quality and not quantity. He never had more than 10 breeding pairs, 16 widowers and about 50 young birds. For him only one thing counts; winning the first prize and participating for acebird titles. A very early pigeon every week is the kick for Dirk and over a total season he is especially keen on the achievement of a single pigeon rather than to the long lists of top results achieved by large teams of racing birds, where none of them really stood out in the crowd.

The base of the pigeon family

Dirk carefully formed a team to compete at the highest level, by investing in super pigeons to cross to his old own family … it resulted in 3 base lines that are easily paired amongst each other and bring champions in many generations. The basic lines are:

‘Blauwe Leo’ is a direct Leo Heremans and his father is half brother to ‘Wondersaske’, direct of ‘Olympiade’ x ‘Goudklompje’, two of Heremans’ best breeders. ‘De Jos Cools Hen’ comes from the loft of neighbour Jos Cools and she quickly developed into one of the stock hens of Van den Bulck.

This is without a doubt a wonderfully composed pigeon family, with numerous champions as ancestors and therefore new champions were easily bred from them … because only few outside breeds were involved, the breeding value of this family lasts so many years.

For many fanciers winning 1st National ace and Olympiad bird is the absolute highlight in their career, for Dirk it was just the beginning … Allthough big amounts of money were offered for ‘Olympic Rosita’, Dirk kept her for breeding and that was a golden decission… in the years after she paired to ‘Goede Rode’ and one of the most impressive breeding pair for sprint racing ever was born!

One of the first children of ‘Goede Rode’ x ‘Olympic Rosita’ was BE13-6139803 ‘Kittel’ … like his mother, he was an exceptional racer … in fact the very best young speed racer in Belgium! Within a few weeks he won

With a record coefficient it brought him the title 1st Nat. ace KBDB speed youngsterrs 2013; at that time the Best KBDB ace cock in Belgian history. And what an impact he had on pigeon racing around the world! Generations and generations of offspring are massive winners, National aces and toppers in finals and aces of One Loft races. And that was just the beginning.

The name is mentioned; Sangers Pigeons. Marcel Sangers was so impressed with Dirk Van Den Bulck’s pigeons, he decided to bring children, brothers and sisters to all the Van Den Bulck icons to his loft … he did not only created the most impressive Van Den Bulck selection, Sangers Pigeons brought them to a great new level. Especially to sisters to ‘Kittel’ became world famous; they are BE15-4264261 ‘Gold Dust’ and BE15-41004521 ‘Angelina’.

In her first breeding year the great class of ‘Gold Dust’ directly showed … she than bred the sisters ‘Kiki’, ‘Kitty’ and ‘Kathy’. They were sensations in Dutch pigeon racing; ‘Kiki’ was crowned as 15th Nat. acebird middle distance ‘De Allerbeste’ 2017 and won 4 different 1st acebird titles! ‘Kathy’ was massive winner with 1st Chalons-en-Champagne 5,940 b. 2017 and ‘Kitty’ was also massive winner with 1st Isnes 1,952 b. 2017. In the years after 3 generations offspring won a/o

One of the top qualities of Van Den Bulck pigeons is they easily adapt to new situations … already a decade ago, when Patrick Boeckx (Vorselaar, BE) won the title of 1st Nat. ace KBDB Sprint Old Birds & Yearlings with a 50% Van den Bulck pigeon. The 2nd Nat. Ace Pigeon KBDB Shorter Middle Distance Young Birds of Stefaan Lambrechts in 2013 is related for 75% to the Van den Bulck bloodline as well. It was only the beginning of endless lists of references with Van Den Bulck birds … In the beginning in 2013 and 2014 for instance:

It is fair to say that Dirk Van Den Bulck has possibly one of the fastest pigeon families of their generation. They perform really well both in their home loft and for other fanciers, which highlights the intrinsic value of this breed. One of the most recent top references is at Dehon-Demonseau, who won 1st Nat. acebird sprint KBDB with ‘Best Kittel II’, bred from a sister to ‘Olympic Rosita’.